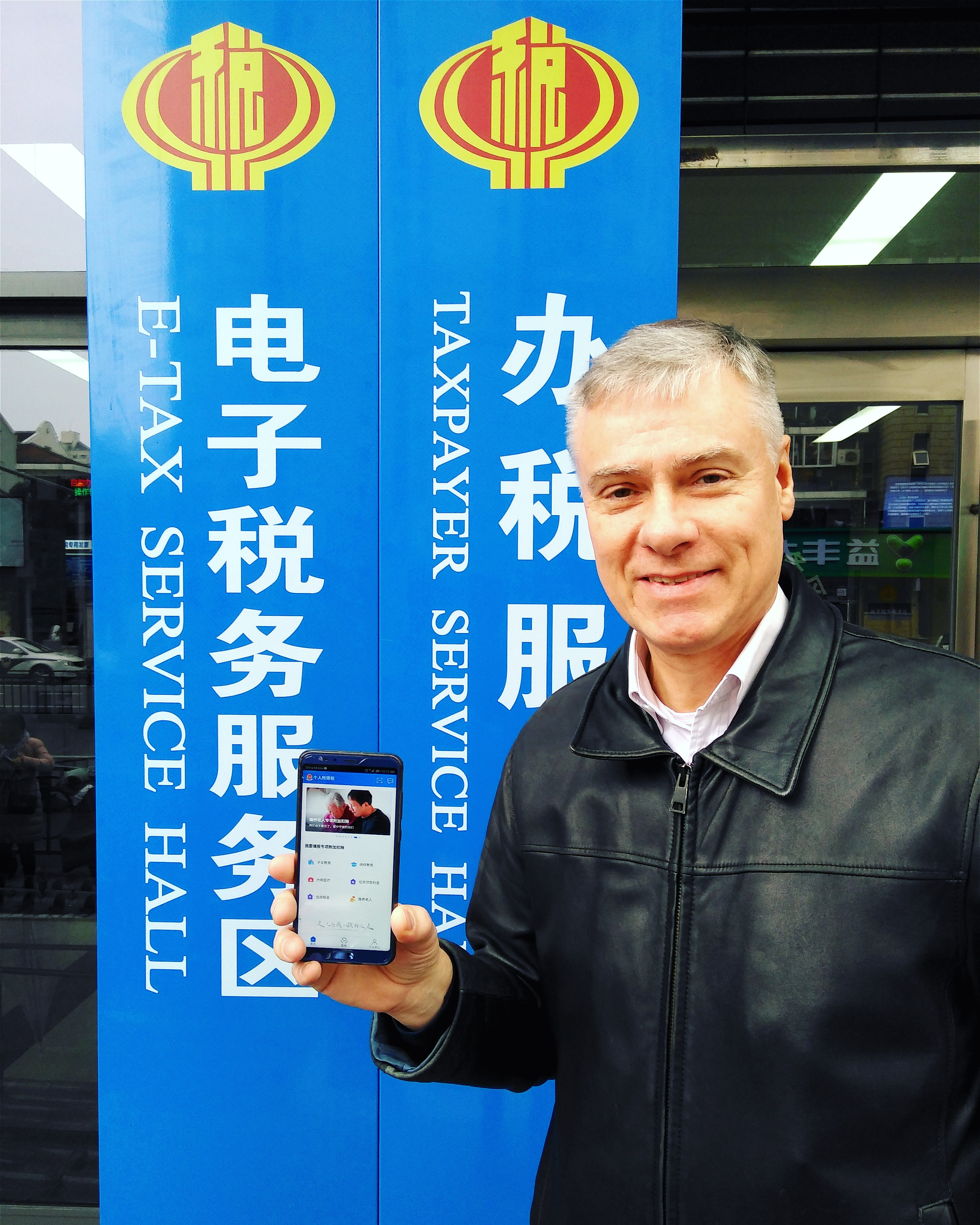 Picture: Each citizen can apply for tax deductions with a downloaded phone app. For foreigners without a Chinese ID card number it requires a trip to the tax bureau. Per Linden, CEO of Scandic Sourcing was entitled for a CNY 5000 deduction per month due to 4 children and 2 elderly parents in Sweden (!).

For us that have worked long in China a changing regulatory environment is one of those things that we learn to live with and thrive on. This year there are, as usual, several quite substantial changes. We will point out just a few which we think will have far reaching consequences.

The economy in China goes through a transformation stage of lower growth and onset of maturity, and is at the same time under stress from increasing costs and the trade war with USA affecting many manufacturing companies.

The rule that will have the biggest impact on production in China is the tightening of Social insurance payments. From January 1, social insurance contributions will be paid to China’s tax bureau, instead of the HR bureau. The rule has always been that all compensations should both be taxed and form the basis of social insurance contribution, however, it has been a common practice due to lack of coordination between the agencies, to use different base for income tax and social insurance, by having a low basic salary on which social insurance was paid and avoid to pay on allowances and overtime. If implemented fully this new law will have a severe impact in the manufacturing industry in China where migrant workers often refuse to contribute to social insurance, as the system is not nationwide and they will not enjoy all the benefits. Scandic Sourcing help clients monitor their Chinese subcontractors for social compliance as part of the Scandic Supplier code of conduct Audit program and have audited hundreds of factories in China. “We often find that companies pay social insurance for their local resident workers but at the wrong level and for migrant workers it is fairly common that they don’t pay at all. There will be a substantial cost increase in labor intensive manufacturing companies”, says Fredrik Sundstrom, Operation manager at Scandic Sourcing in Shanghai. There are no news yet on when a unified national social insurance system will be introduced.

Will there be a lack of workers

To finance the social insurance system start to look like a tough challenges for China with an aging population. Now the awareness of that the population will peak in a few years and then rapidly decline start to worry. By 2050 it is also estimated that 30% of the population will be over 60 and the active workforce shrink with 300 million people from its peak. The one child policy was abolished in 2015, to be replaced with a recommendation, but still a restriction to have two children, and lately there has been discussions to abolish the system completely and to encourage 3 children. This is not so easy with high cost of living and especially real estate prices in the cities. Young people are focusing on their careers and having children later. Newly married people in some parts of the country now have to pay a deposit of about CNY 20,000 when they get married, which they can get back after they produce a baby (1 CNY= 6.9 USD)

Restructuring of the tax burden

It has been recognized that many small businesses has a tough time with increasing cost and that small businesses are the creators of new jobs. At the same time government income is not growing at the same rate. In the past unofficial income from land sales has been an important income for local governments. Construction is one of the industries that after so many growth years has started to show negative growth. China has for 2019 taken some drastic steps to improve tax collection while at the same time giving smaller companies and workers a tax break.

VAT tax on private consumption was earlier not strongly enforced. VAT collection was driven by very strict requirement on companies, who could only record an expense with a special tax invoice stamped by the selling establishment. This lead to a “pull” system in the economy where companies got the role of ensuring VAT payments were made, while consumers did not need these tax invoices and businesses often did not pay the VAT on it. This time seems now to be over and it is more explicit that all transactions should be covered by VAT. There are exemptions to this for micro-companies with less than CNY 100,000 in monthly income (increased from 30,000 from January 1, 2019).

The online business has been one such grey area where neither VAT nor income taxes has not been paid in an efficient way. The new ecommerce law from Jan 1 require that all e-commerce vendors are licensed legal entities, with relevant permits and pay VAT. It is rumored that over a million Alibaba Taobao (C2C) shops has been closed in the last months. The aim is also to get rid of the untaxed but very popular personal shopping cross border (Daigou) business which accounts for 10s of billions of dollars.

E-commerce platforms like Tmall and JD.com are now jointly responsible with vendors for IP infringement on their platforms. These platforms started to clean up several months ago and it is now more difficult to open a Tmall shop, and bringing in new brands require proof of trademarks, contractual arrangements with the brand owner and proof the products are coming from the correct source.

“The new rules will benefit us regular importers that pay taxes and follow the regulations” says Chelsea Li, General Manager at Scandic Foods Asia in Shanghai that specialize in importing Scandinavian food products to the new Chinese middle class.

A nation of tax planners?

Until now there has been no personal tax deductions in China. Tax has been reported on a monthly basis with the employer responsible for calculating and paying in the correct personal income tax. The new rules from January 1, 2019 allows for deductions for medical, children’s education, elder care expenses, rent, mortgage interest and continuing education. There is also a pilot program for pre-tax pension savings. While each deduction jut now has a fairly low cap, it is a substantial shift way by giving citizens an active role in its tax planning and this might be an embryo for an emerging financial services industry. While employees relatively easy can apply for their deductions in a phone app the burden will be on companies to administrate this new task. “The back end has not yet been digitized and it requires HR departments to download the information from the tax bureau and then fill in manual forms for each employee” Says Nerissa Huang HR Manager and Consultant at Scandic Sourcing in Shanghai. Scandic Sourcing help Clients with outsourced Accounting and HR services.

New tax brackets has been extended for the lower income levels where people in the CNY 5-20,000 range should reduce their taxes with about 50% so generally offsetting the employees increased social insurance payments. Bad news for expats in China is that now they will get taxed on their global income of they reside in China more than 183 days. This rule will have a very negative effects on bringing experienced talent for large companies and headquarters to China if it is implemented as it says. There will probably be some adjustments in the implementation.

While the tax reform has been planned and announced already half a year ago, the tax bureau made a surprise announcement on January 9, 2019 that corporate profit tax for small tax payers will be reduced to about 5% on the first million and 10% on the next 2 million CNY in profit. The regular rate is officially 20% for small scale tax payers but there has been a 50% discount in the last years. For regular tax payers, the corporate income tax is 25%. . The way this was announced gives a feeling that the situation is probably worse than we know.

Many private exporters has been affected by the reduction in American business, and to make things worse credit is getting harder to get.

With banks traditionally reluctant to lend to private industry a grey market with peer to peer lending emerged. With a stock market lacking credibility and restrictions for how much real estate private people can buy this has been a good way to invest excess cash at high returns and an efficient way to finance short term loans. An army of brokers offering this service emerged. However, the industry has been troubled with fraud and in the end the Chinese government decided to stop it. Instead bank regulators announced in November 2018 that no less than 50% of new bank loans should go to private sector instead of to state owned companies. “We will see how well the banks cooperate to meet that target but we see already that banks are now actively contacting us to offer loans”, Says Amy Meng Accounting Manager at Scandic Group.

Taxation and trade conflicts has interesting interlinks also earlier. Since year 1068 Chinese could pay their taxes and land in silver. With a growing economy and tax burdens, more silver was demanded. Large amounts of silver they eventually got from the British buying Chinese tea. While a big export success, there was very little the Chinese imported resulting in a substantial trade imbalance at that time. When the British started to run out of silver they developed the Opium market, which reversed the silver flow, leading to the first and second Opium War and a century of humiliation by foreigners still strongly felt by many Chinese people.

A parallel can be drawn to the situation today, the export success of China has led to tensions and the Chinese government know their history. The drive to improve import started long before Donald Trump made a big deal about that he is running out of dollars. This time the Chinese has come up with the solution more or less themselves.

In the last two years China has cut import duties severely to promote import. Most duties now are in the range of 5 % and there are many 0% duty items, e.g. baby formula as well as most technology items. The China International Import Exhibition in November last year was a new effort from the central government to highlight for consumers and government the importance to increase import and consumption. Now it is not Opium but imported luxury goods, watches, handbags, food and baby formula Chinese consumers are developing a dependency on with the Chinese government’s encouragement, a slightly healthier alternative.

The result start to be seen in the new numbers. While exports in 2018 jumped 7.1%, imports increased 12.9% leading to a 18% reduction of the Chine trade surplus compared to the year before.

Foreign trade jumped 9.7% in 2018 benefitting from both the import promotion programs and the Belt and Road programs.

While the Trade war with the US start to affect some manufacturing companies in China, others are benefitting. The situation with the US at the same time it gives European and Japanese companies new opportunities in the current drive to increase import.

“Generally all the reforms to reduce the grey areas of the economy gives a more level playing field for foreign companies working in China” Says Per Linden, CEO of the Scandic Sourcing and Scandic Foods Asia.

We take this opportunity to wish all our customers, partners and friends another exiting year in 2019 and also a prosperous year of the pig starting on Feb 5, 2019.

The teams at Scandic Sourcing, Scandic Foods Asia and iQubator